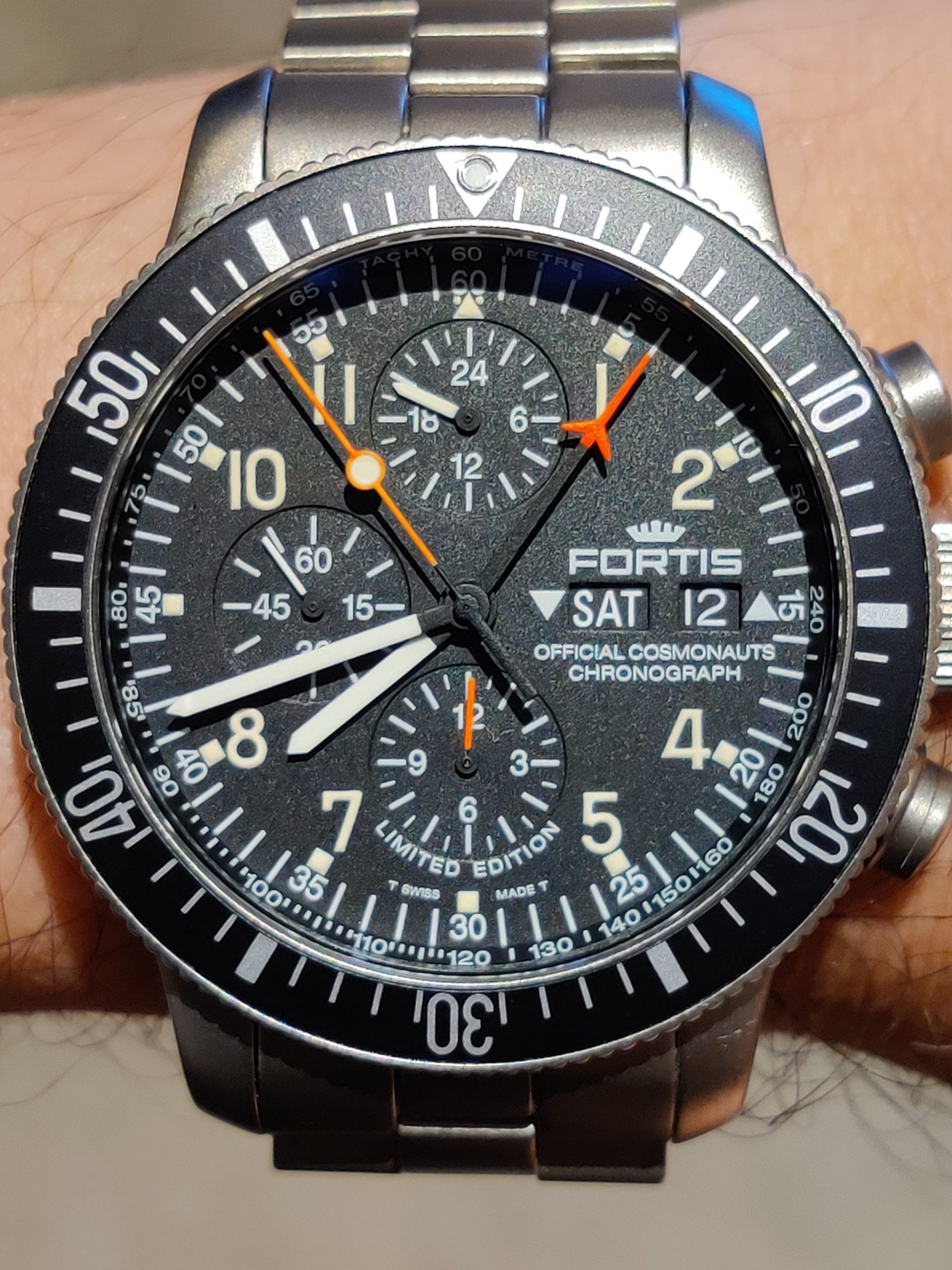 Most chronograph watches have a large hand that measures seconds elapsed while the chronograph is running, and sub-dials which show elapsed minutes (and sometimes hours) – though you might need good eyes to be able to see how many minutes have gone by, at least with a glance.

Some chronographs don’t show elapsed minutes or hours at all – so the most you can count is a minute at a time, like a simple stopwatch. The simplest of these are known as “One button” chronograph, like the Omega Seamaster Chronostop…

There are other chronographs, however, which make it a little easier to read – the kings of “big hand” chronographs display the elapsed seconds and minutes on large hands, so you can see time passed under the chronograph more easily.

Many watches released in the early 1970s used movements based on the Lemania 1340 family; basically the same one which appeared under the name of Calibre 1040, which made up Omega’s first automatic chronograph – their answer to the Chrono-Matic Calibre 11, Seiko’s 6139 and Zenith’s El Primero.

The Lemania 1341 movement is a lower-spec variant of the 1340 / 1040, with a simpler mechanism and lower jewel count. It’s often to be found in a variety of asymetric-looking watches, such as the Tissot Navigator Automatic. As mentioned previously, Tissot was a sister brand to Omega and sometimes even featured in the same catalogs.

The Tissot above was an auction purchase which might have been better staying in the saleroom – the case is a bit beaten up (but not offensively so), but the dial has a scar just after 10 o’clock, that is un-noticeable on the wrist but jars a bit in photos.

Tissot, Omega and Lemania formed a group called SSIH in 1930, which evolved – in a fashion – into the Swatch Group of today, which owns Omega, Tissot, ETA and many more. For more info on the 1341 as used in the Tissot Navigator 45 501, see Richard Askham’s blog. As it happens, Richard serviced the Tissot watch above.

The successor to the Lemania 1340 was essentially the Lemania 5100 series – used in a whole variety of Sinns, Heuers, Omegas and more. The 5100 is described as not being attractive but being particularly robust – so useful in “tool” watches as used by sailors, pilots and the like.

The ultimate use of a tool watch could well be the case where a Russian Cosmonaut was on a spacewalk outside the ISS, and needed to hammer in a rivet but realised he’d not brought the hammer he needed – so rather than abort the spacewalk, took off his Fortis Cosmonaut watch, and used that to batter in the rivet instead.

Fortis has produced a B-42 Cosmonaut watch which uses a Valjoux/ETA 7750 movement and is a big old lump of steel. But there’s a lesser-known special edition of the B-42, produced with a Titanium case and bracelet and featuring a Lemania 5100 movement and Tritium dial, even though it was produced in the mid-2000s.

In this case, the lollipop hand is the seconds hand of the chronograph, the hand with the aeroplane-type arrow is the chrono minute hand. The 6 o’clock dial is chrono hours (spot the orange hand vs the white hands that delineate normal running time). The 9 o’clock dial is running seconds,and the extra dial at 12 o’clock shows the time on the 24-hour scale.