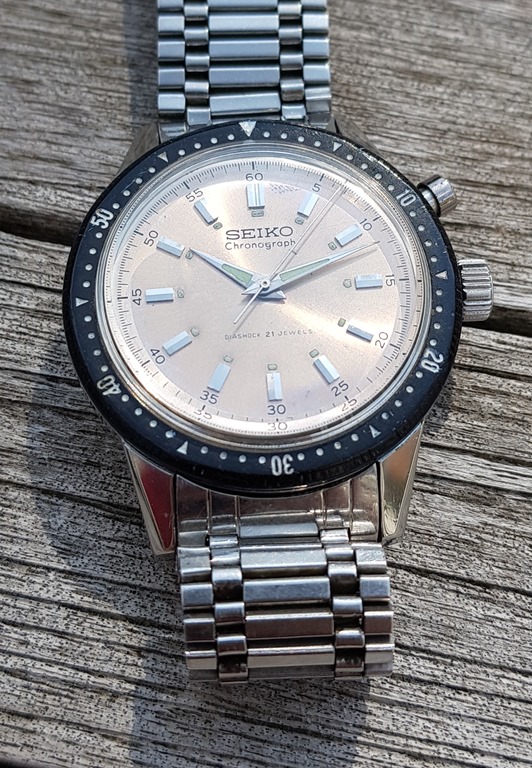 I fell so deep into many rabbit holes when learning about Seiko watches, largely because they had so many watch lines and lots of curious and interesting developments.

As well as the release of the World Time range – to coincide with the Tokyo Olympics of October 1964 – Seiko also released the first chronograph watch that came from Japan, in celebration of their role as timing sponsor of the Games.

The very first of the chronographs were “monopushers” – the single button started, stopped and reset the chronograph timing hand, and there was no sub-dial. Normally, a chronograph watch will have a means of visibly timing the seconds – or parts of a second – and then will also allow the counting of minutes and maybe hours.

In the case of the original Seiko chronograph, the “stopwatch” function went up to one minute, so either you could only time things up to 60 seconds, or you’d have to remember how many times the hand went around the dial. Not a problem if you’re timing short races, but more of an issue if you want to time a marathon.

This particular one came to me on its original bracelet – a really rare thing, since it has 18mm lug width end-links, vs the 19mm ones the same bracelet would be seen with on World Times. It’s even very rare on those…

This is a “45899” chronograph, originally with a silver dial, and it hails from August 1964. It has a 5719 movement, also known as the Seiko Crown. Seiko even brought out a modern Presage model supposedly in style of the original, though it doesn’t share a lot in common.

There’s a little damage on the dial, and instead of a silver dial, it has a pretty even bronze tint – age-related discoloration or “patina”. I really like the look of it. The bezel around the outside on the early watches was made of plastic – bakelite – and is really fragile. A savvy user could manually move the bezel to count minutes – the simplest way of doing so would be to move the bezel so that the “0” marker points to where the minute hand is when you start your timing, then the watch’s own minute hand will do the counting, at least up to one hour…

Another variant of the same movement came out, in the shape of the 5717 – with an added date display at 3 o’clock. That watch came with a steel bezel in place of the plastic one in the 5719, and was available in silver and grey dials – like the 45899 / 5719 – though it seems the dark dial is rarer. This one is  bit later – it’s from April 1966 and still features the Olympic torch, though it’s stamped rather than etched (as on the earlier 5719, which has worn and faded to the point where it’s hard to see). This one came to me on a “beads of rice” bracelet which probably isn’t original, though it could be – it fits well. The watch is in fantastic condition. They were very limited in number (rumoured there were only 50), and so they change hands – occasionally – for a lot of cash.

Bonhams featured a 5718 in their first Seiko dedicated auction – sold for £13K, no less.