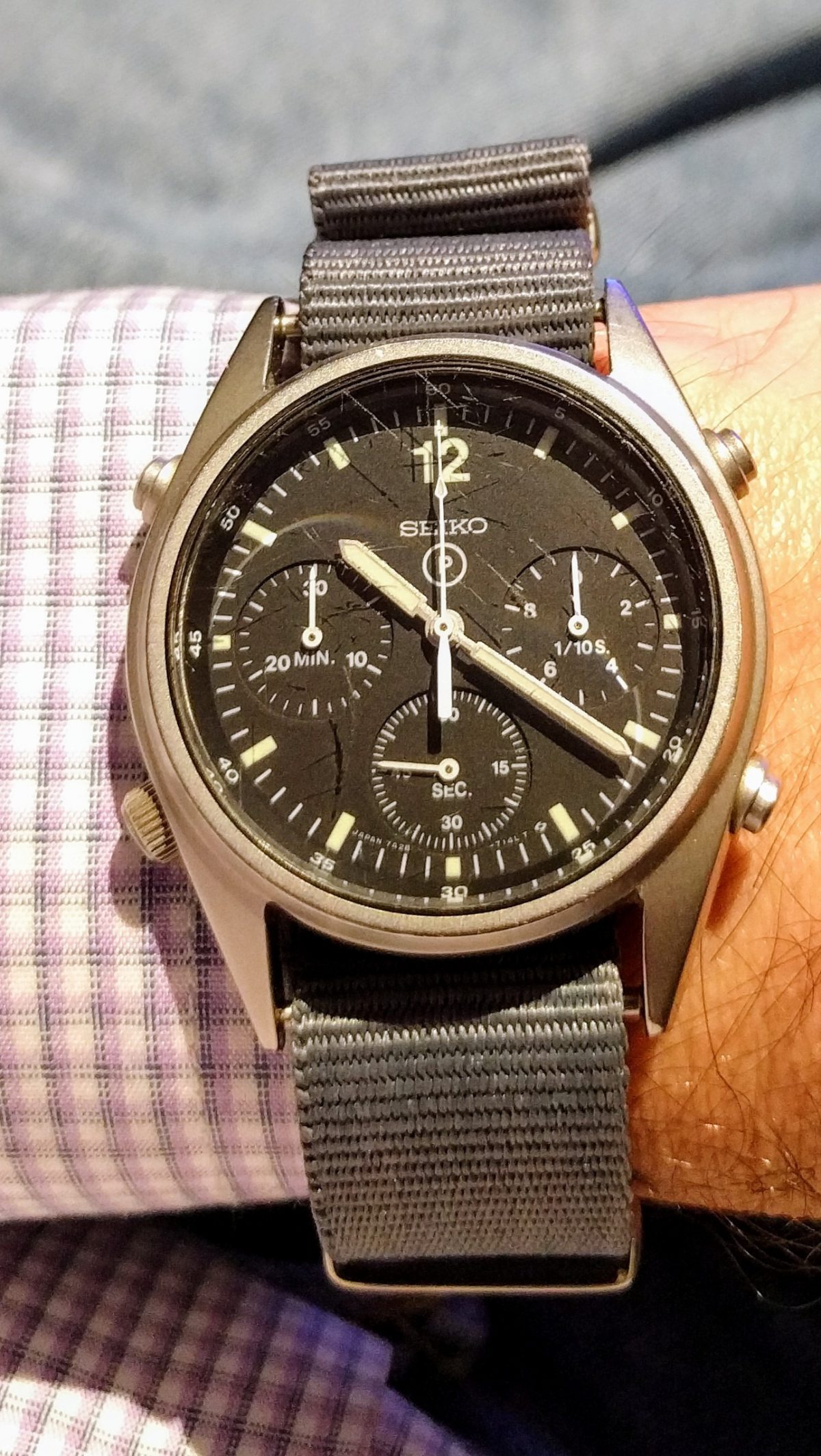 Seiko claimed numerous world firsts throughout their years, from (arguably) the first automatic chronograph, the first commercial quartz watch (which, at the time, was way more expensive than mechanical ones), and they also were the first to launch a proper analogue chronograph watch that happened to be quartz – the 7A28.

There were a number of variants in case style, but the most sought-after of the 7A28 is the military-issued one known as the RAF Gen 1 (and an RAF Gen 2 came along later using a different movement). To give it the correct name, it’s a Seiko 7A28-7120.

The first 7A28s appeared in 1983 and their successor, the 7A38 – which featured a date and day display on the 3’oclock subdial – showed up a year later, yet the mil-spec model that was made for the RAF was first issued in 1984 and continued unmodified until 1990. In total there were just over 11,000 produced and stamped with MoD numbers.

The most obvious differences between these watches and the consumer 7A28 is that they have fixed bars on the case (rather than spring bars) – a common standard on military watches – as well as a circled P mark on the dial and some other insignia on the rear. Otherwise, it operates exactly like the 7a28 or 7a38s that are available in lots of other case styles.

See the video at the bottom of Chris’ podcast interview with me, talking about Seikos and showing the 7a38 doing its thing.

The NATO Strap that’s normally worn with these got its name from the NSN or NATO Stock Number that’s stamped on the back of military-issued equipment – in the case of the Seiko, here, the NSN is 6645-99 7683056, which decodes as 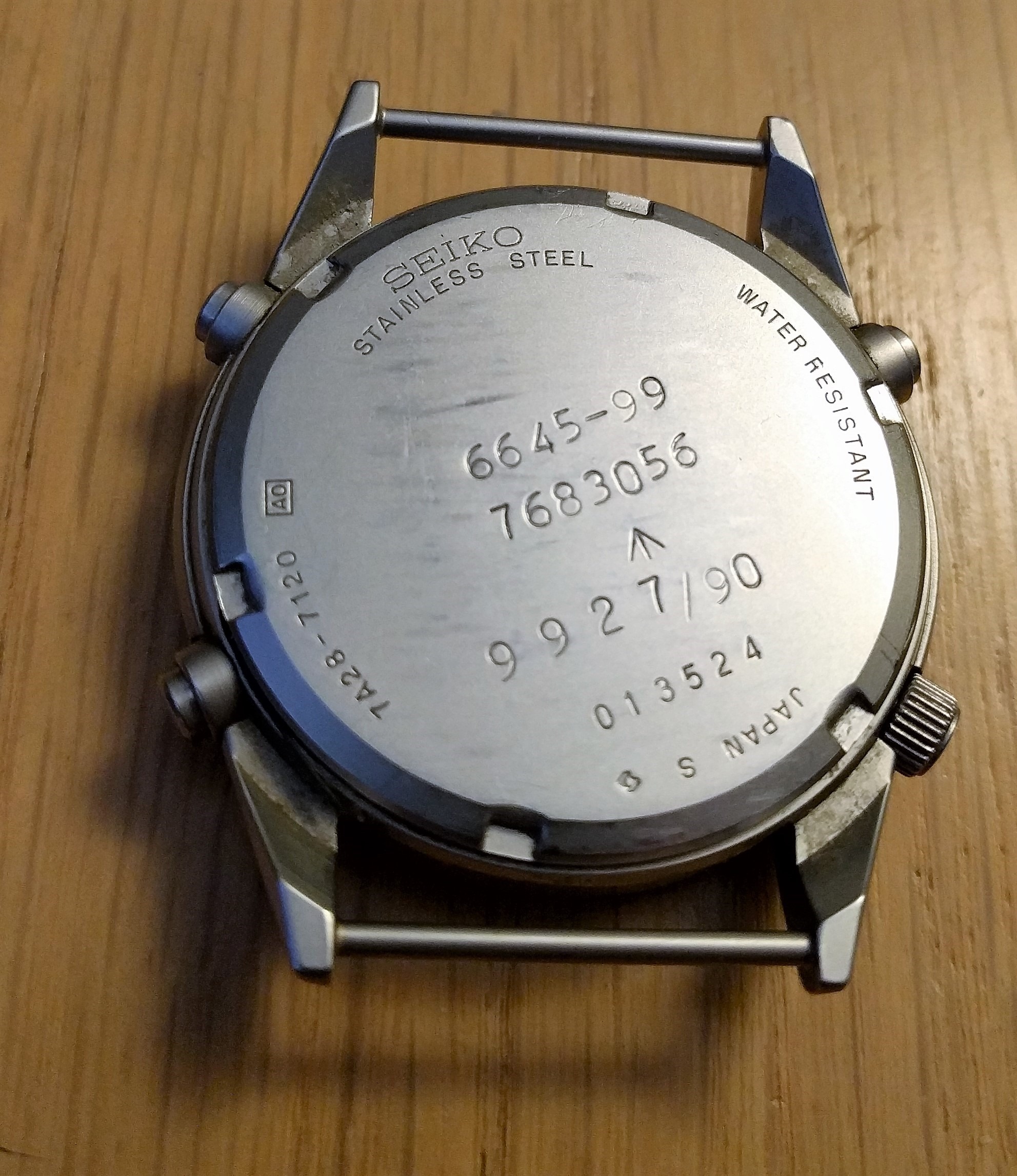 Below the NSN and the “Broad Arrow” mark (actually called the Admiralty Arrow, and historically stamped on any number of things indicating they were property of the Crown) is the issue number and the year it went out, and below that is the actual Seiko serial number. So the watch above was given to some service person in the RAF in 1990, and by decoding the Seiko serial I know it was made in January 1990. Gulf War era then. 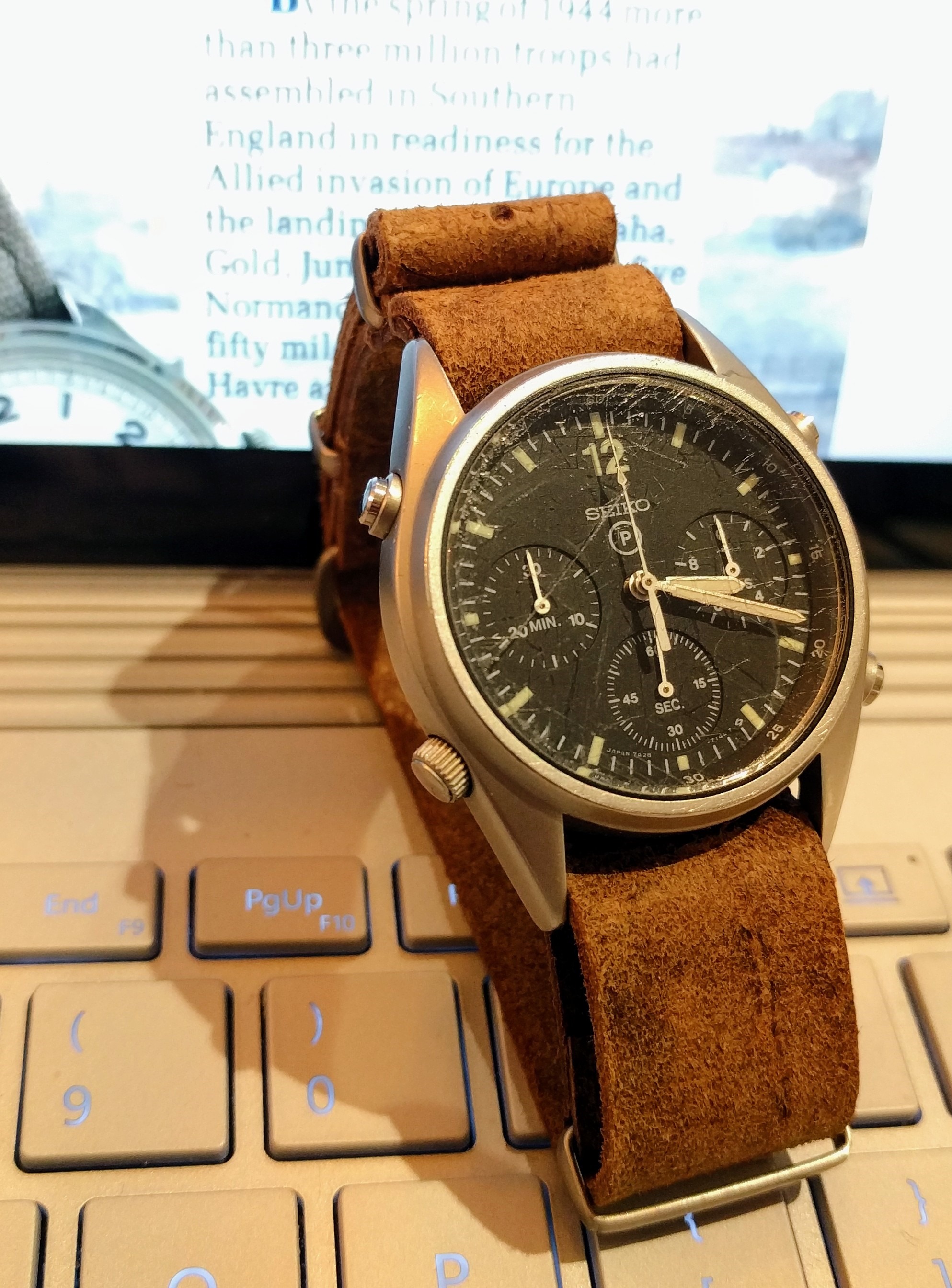 I bought two of these from an auctioneer who was disposing of all kinds of military surplus stuff; both were a bit beaten up and not working, so off they went to my Seiko specialist and came back in great shape with new crystals and having had a full strip down and re-assembly. 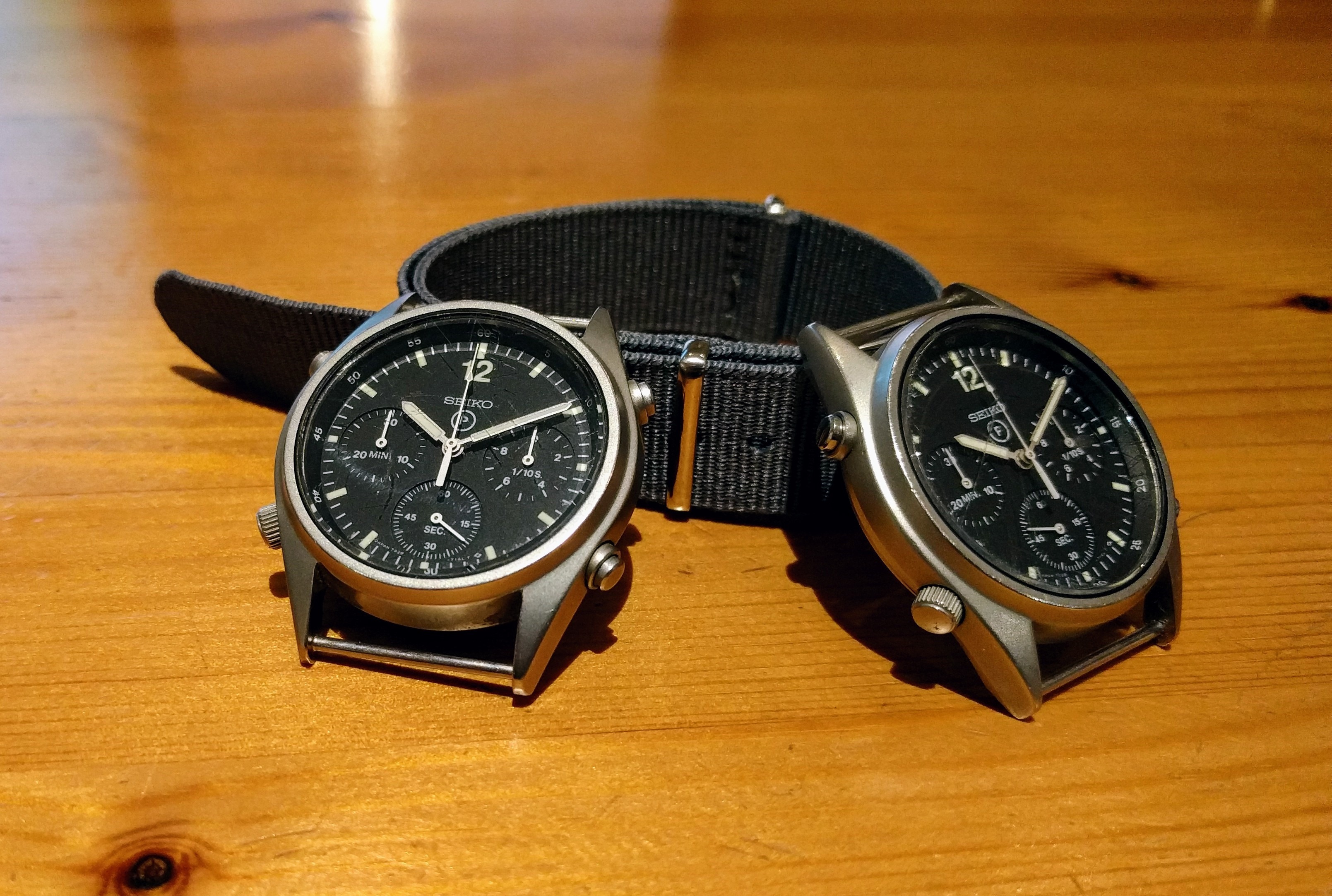 Quartz watches got really cheap in the 1980s, and had a reputation of being disposable – lots of fragile plastic bits inside, and no reason to try to service them. If you own a high-end watch with a quartz movement today, and you send it to the manufacturer for a service, it’s standard practice just to replace the whole movement.

Not Seiko, though. This was a proper movement that could be stripped, cleaned, oiled and reassembled just like a mechanical one. 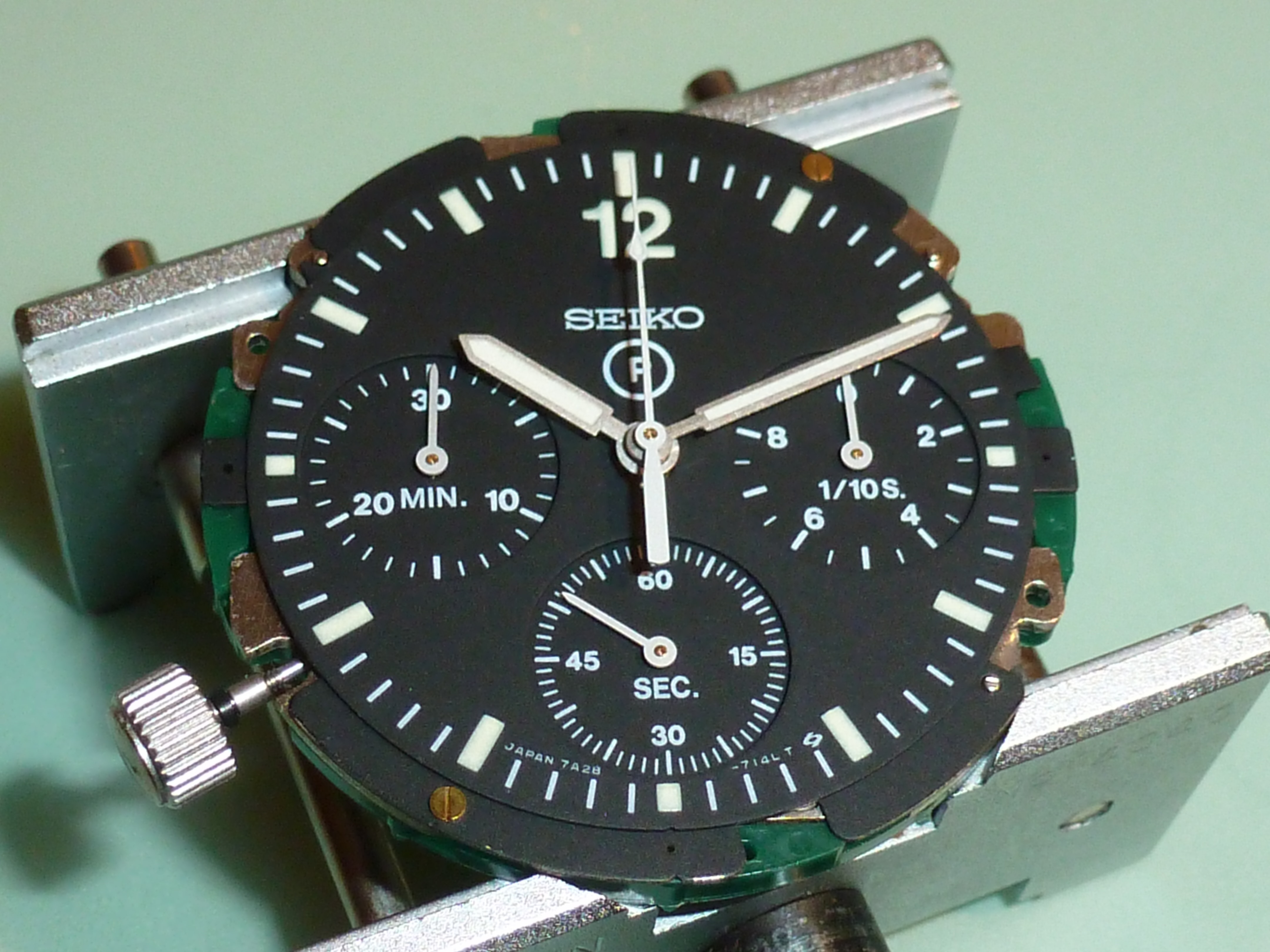 Note the P on the dial – military specifications dictate that they needed to carry this mark as there is a trace of mildly-radioactive Promethium in the luminescent material on the dial. The same circled P is on the Seiko RAF Gen 2 as well. 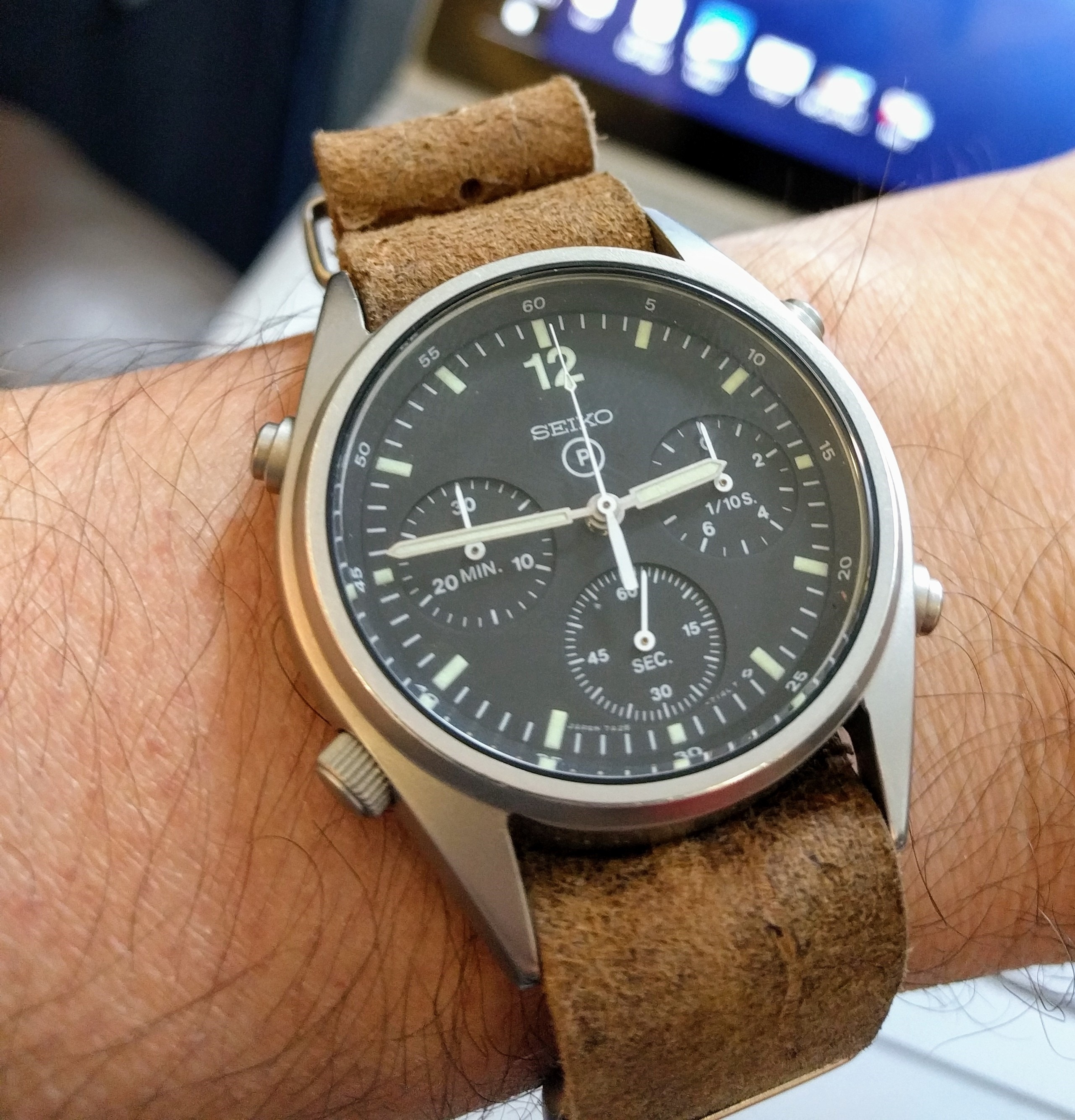 So, fully rebuilt and on a raw leather NATO, it makes a great tool watch. And it probably saw a much harder life in the hands of its first wearer than it ever will with me.