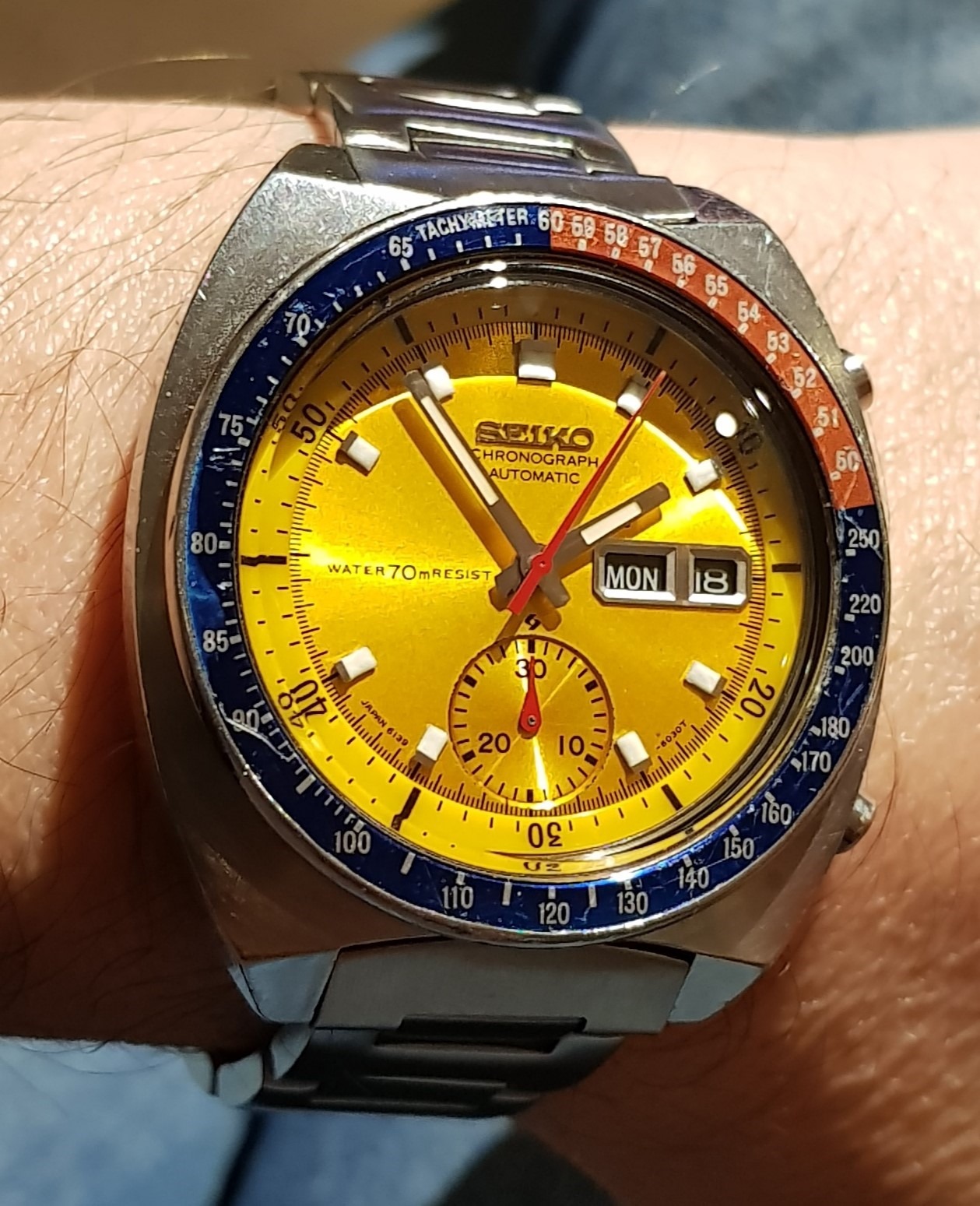 Colonel William R. Pogue was a USAF fighter and test pilot, who went into the astronaut program and would probably have gone to the moon on Apollo 19, if that program hadn’t been shuttered early. Bill Pogue still managed to spend 84 days in space on board Skylab from Nov ‘73 to Feb ‘74, and it was many years later that someone spotted in photos of the time, that he was wearing not only his NASA-issued Omega Speedmaster, but some other yellow-faced thing on his other wrist. So they wrote to him, asking what it was, and since then this watch has been referred to as the “Seiko Pogue”. Read more on the Pogue here, Fratello, W&W and the collectors guide, here.

Back to numbering – the first refers to the movement, and the second is the case style… so there are 6139-70xx watches that look similar (in the broad layout of the dial – that is largely governed by the movement) but have very different dial, hands and case features … here’s a 6139-7002 (from Dec ‘72) for example: 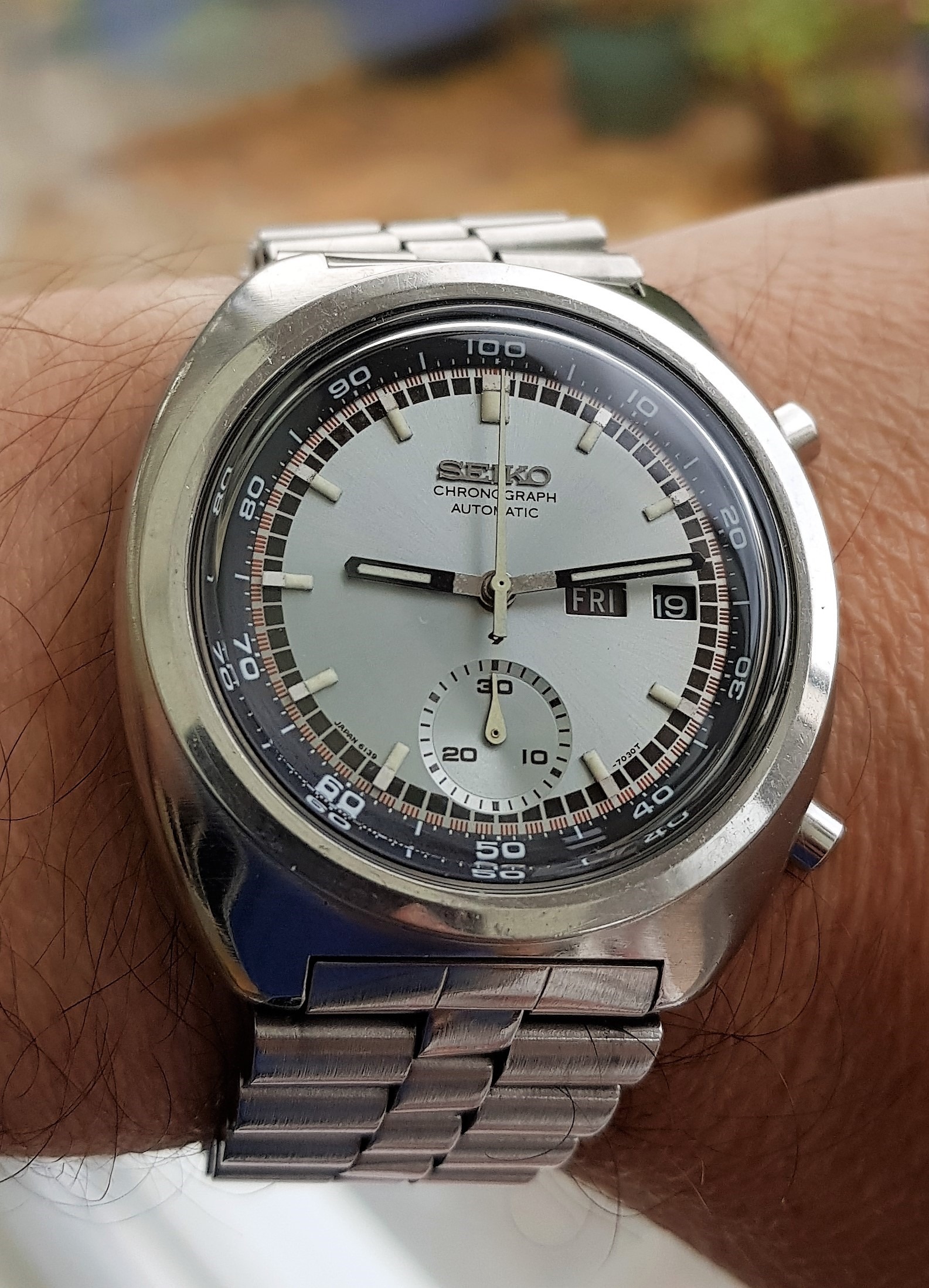 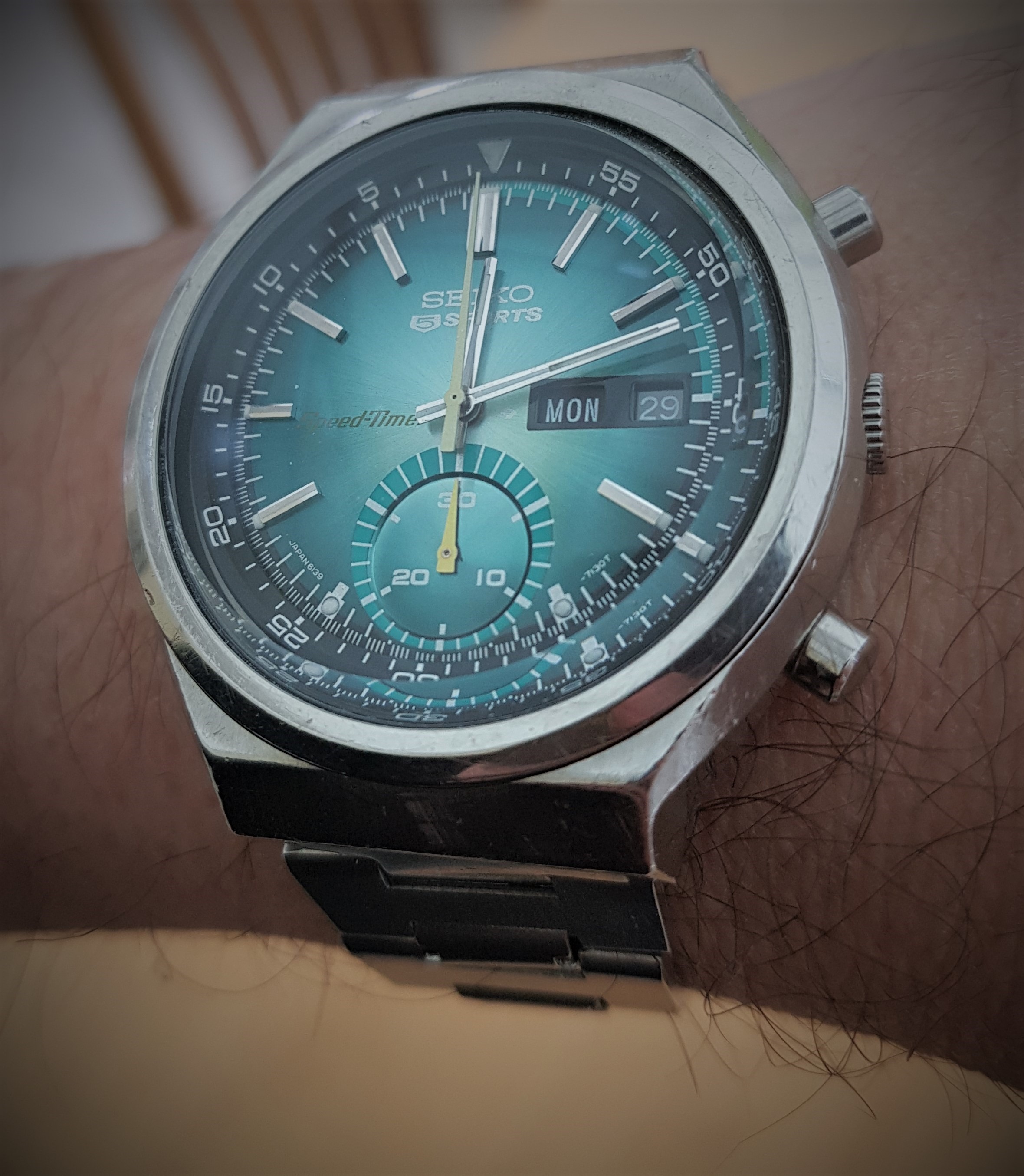 The –6000 series was first released in early 1969, featuring the fixed “Pepsi” bezel and available in Yellow, Blue and Silver. Variants came along later, with –6001, –6002, –6005 etc being essentially regional numbers for what was more-or-less the same watch.

As mentioned in the previous coverage of the 6139s, early models had WATER 70M PROOF at 9 o’clock, and the case back said WATERPROOF. This later changed to WATER 70m RESIST on the dial (until ‘72, after which it said nothing) and WATER RESISTANT on the case back. Note the difference in capitalisation of M between the two… it’s the little things… 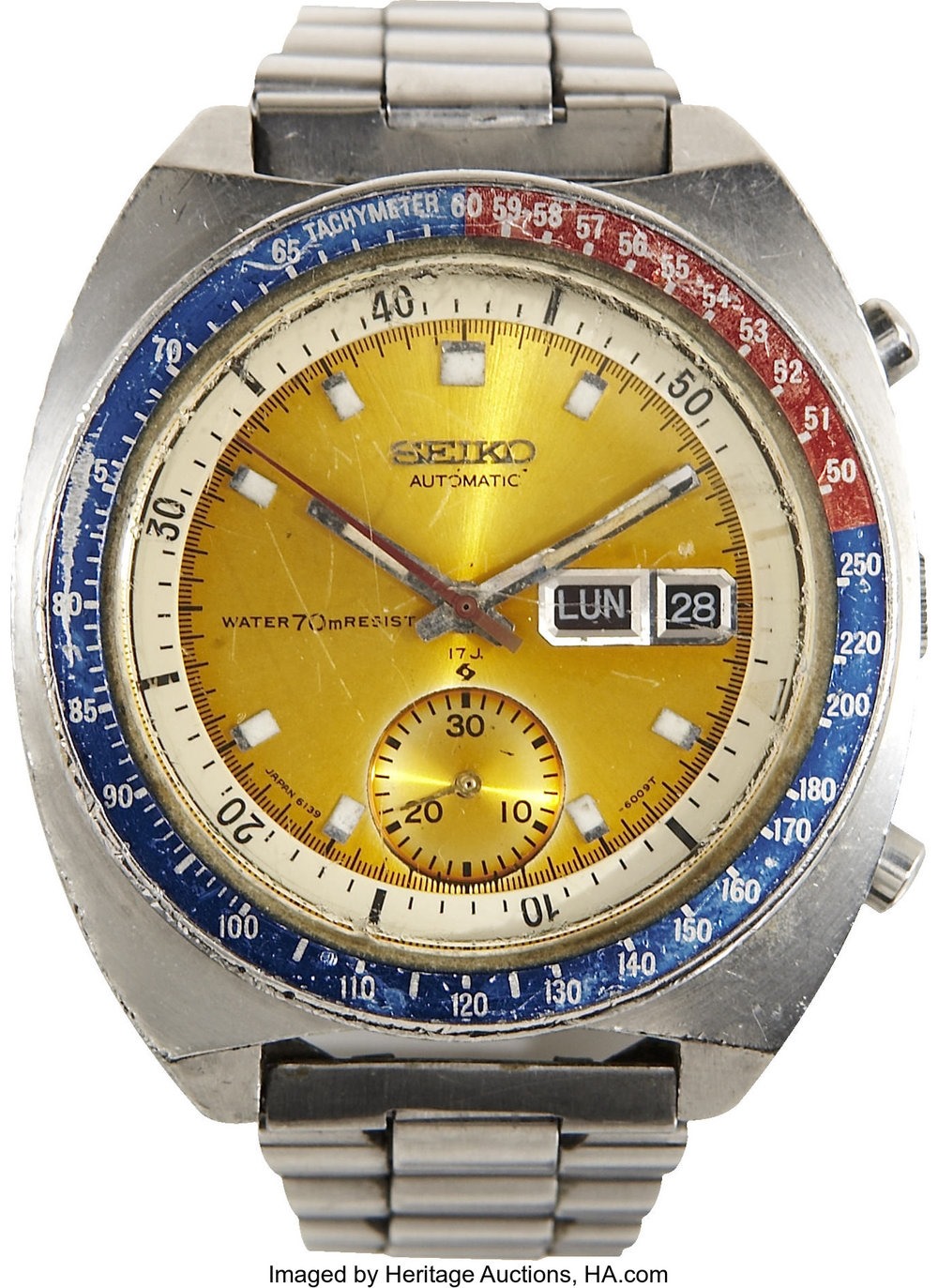 Some people would call this variant, the –6005, the “True Pogue”; in other words saying any other watch referred to as a Seiko Pogue would be wrong. You could split hairs and say that anything other than Bill’s own watch shouldn’t be named Pogue…

Others would say that any yellow-faced 6139-600x could be called a Pogue, but the blue and silver variants definitely can’t. Finally, you’ll see lots of ads on eBay and on watch forums offering “Blue Pogues” or “Silver Pogues” – YMMV.

Anyway, as you can see from the photo of the Colonel’s own watch above, it has WATER 70m RESIST so that checks out as correct for a late 1971 watch. The fact that it’s a US-model –6005 and not the commonly available internationally-released –6002, also shows a couple of differences on the dial – it only says AUTOMATIC under the Seiko logo and it mentions 17 Jewels under the hands, whereas the –6002 had CHRONOGRAPH AUTOMATIC under the logo and no jewel count on the dial.

The reference number on the bottom right is the dial code too – and there are numerous variants of that as well. And all of this within one family – Seiko’s production systems must have run into millions of different SKUs.

A showcase of Pogues 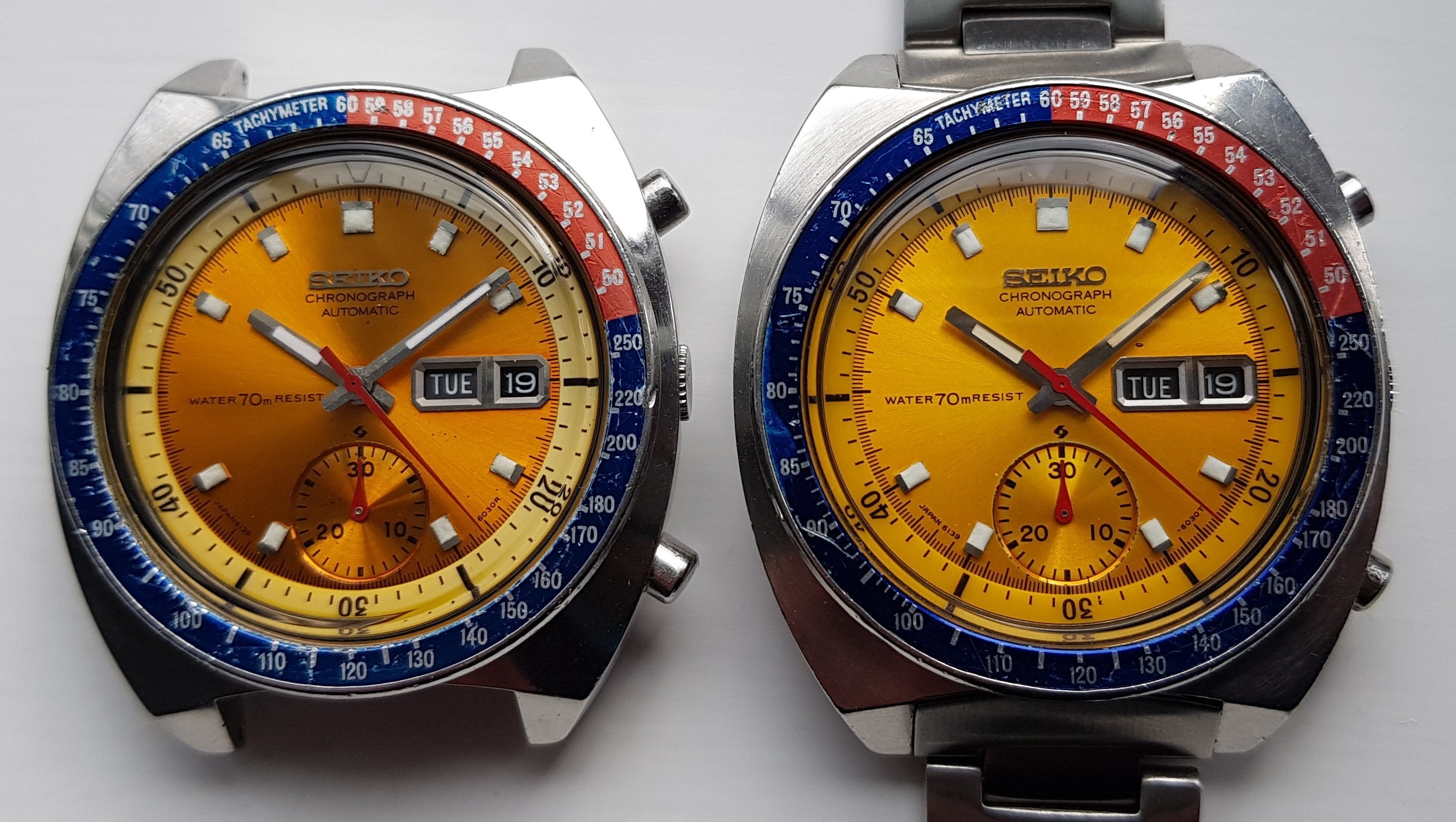 Both have the the correct RESIST dial markings, but the one on the left is a 6030R dial variant whereas the earlier model on the right is 6030T. You can see a sunburst finish on both, but the R dial is slightly darker, more of a gold colour than yellow. Also, the subdial on the R has barely-visible concentric rings, which give it a more pronounced appearance.

There’s little or no knowledge as to why Seiko produced T and R variants, and they did them in blues and silvers too, as there was no clear cut over, it seems – it’s possible to find a T dial that is much later than the RESIST R-dial above.

The R dial watch was picked up at a watch fair and serviced to bring it back to life, then I set about finding a suitable bracelet – in the end, sourcing a very smart period Seiko “President” style bracelet by Stelux …

… and deciding to put that on the 1971 T-dial watch instead. 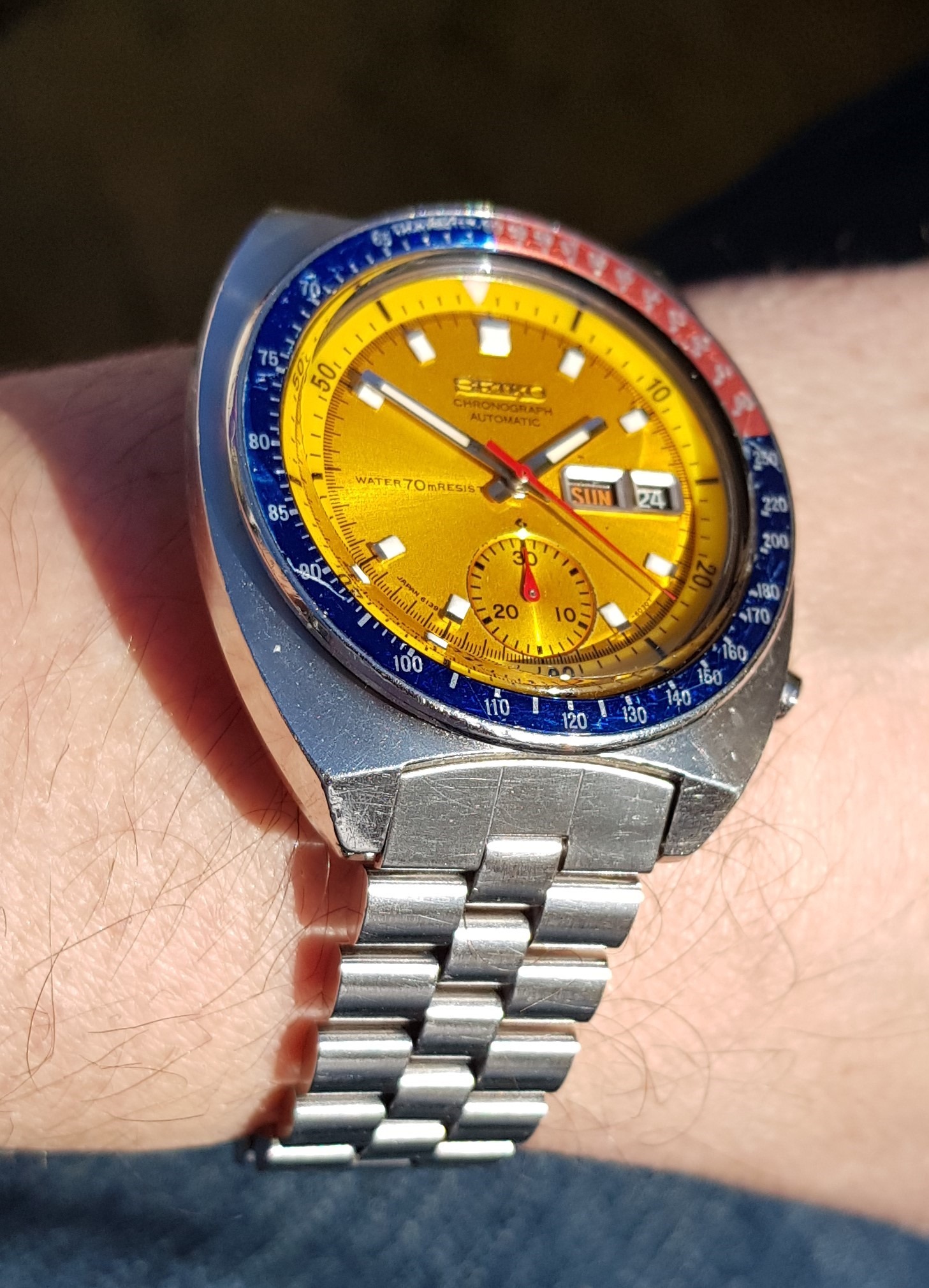 Finally, a word of warning. Below, was the first Pogue I ever had, now known to be a put-together watch by an eBay seller whose description neatly avoided mentioning that he’d had it tarted up, and presented as a pristine example: 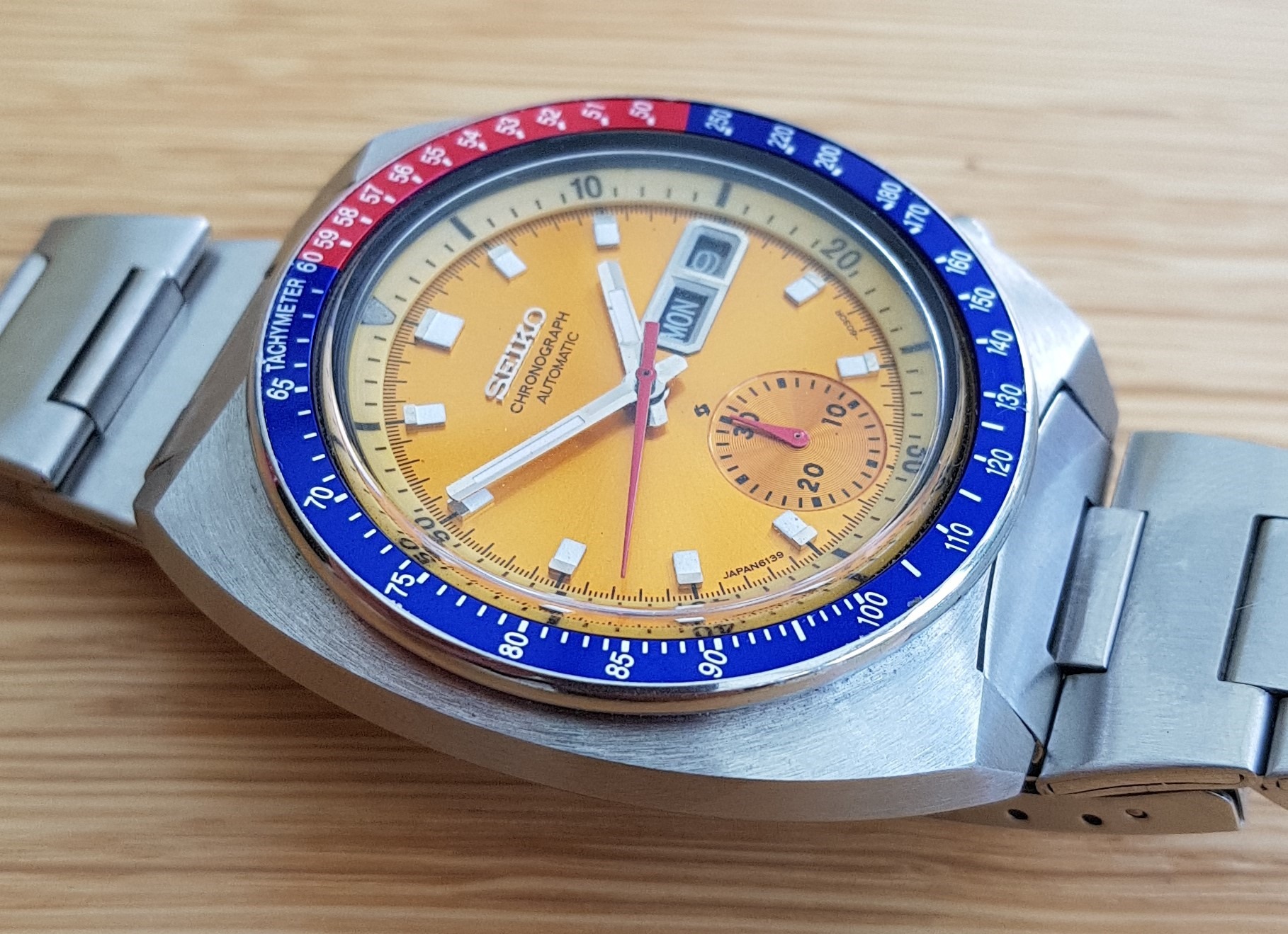 The tell-tales are usually found in the subdial – much more pronounced concentric rings, and the markers don’t go to the edge of the bevelled recess: 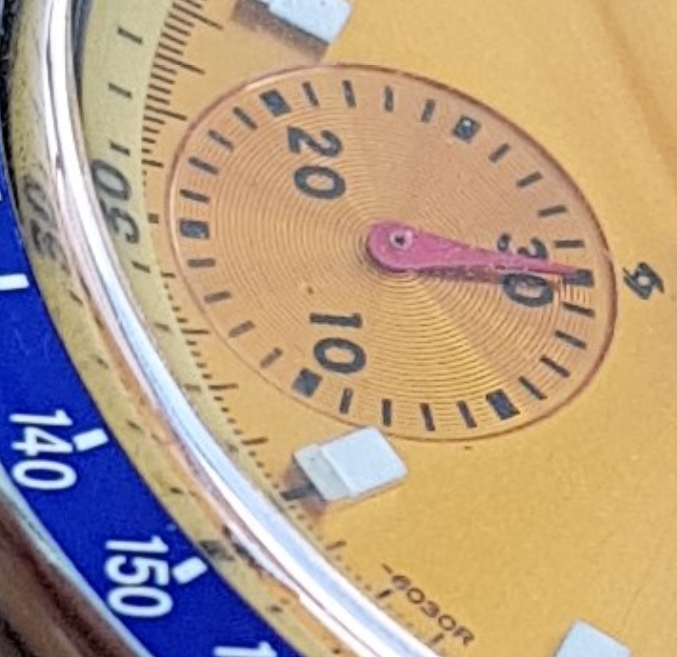 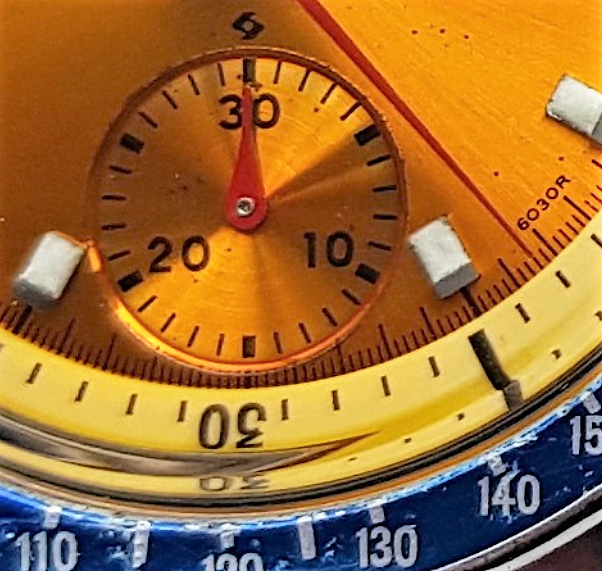 Note as well, the position of the marker above 140 on the bezel – on the real one (which is authentically beaten-up looking), the marker finishes between the 1 and 4 whereas on the aftermarket/fake bezel above, it sits above only the 4.

In many hobbies or industries, it’s perfectly acceptable to substitute genuine OEM parts for aftermarket – the originals might not be available any more, or the aftermarket bits are better. But when buying a watch like this, if you can spot signs of fakery that have not been disclosed by the seller, then walk away, right away.