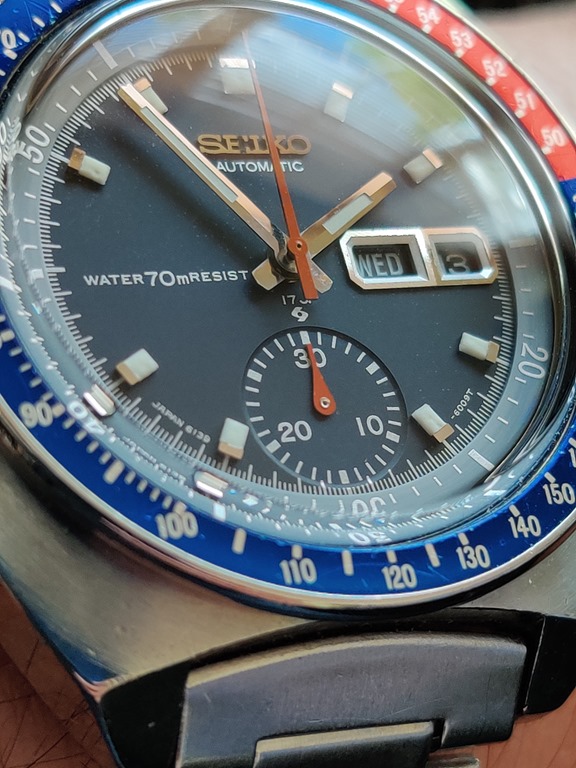 Someone pointed out that if you Google “International Pogue Day” then the top hit is on this site – in one of the many posts about Seiko’s “Pogue” family and in particular the one from 2019 which talked about International Pogue Day. This is a community-led attempt to get Pogue fans the world over wearing their watches on 16th November and celebrating the anniversary of the blast-off mission to Skylab, on which a certain Col. William Pogue was aboard. Since last writing about Pogues, I’ve acquired a few more, this time adding a couple of Americans to the mix. The first was a 6139-6005 from July 1971.

The –6005 variants sold in the Americas have a slightly different dial layout than those that went everywhere else – the text below SEIKO says simply “AUTOMATIC” rather than “CHRONOGRAPH | AUTOMATIC” as –6000 and –6002 versions do; it also has the mark of “17J” below the centre, and the dial code on the lower right is 6009T, unlike the –6000 which would be 6030T.

Nobody seems to know why SEIKO felt it necessary to leave out the word CHRONOGRAPH from American watches. Also, even in earliest form, no American watch was marked WATER 70M PROOF – they’re all “RESIST”. The –6005 was thought to have been produced from 1971-73, and is in fact the version that Pogue himself wore (though it was a yellow dial one). Some collectors happily refer to any Seiko 6139-600x as a “Pogue” while others insist that only a yellow –6005 can be called that, or at least refer to them as “True Pogues”. Oh and the nearer the serial number is to 190945 (indicating Sept 1971 manufacture) then the closer your watch is to the “Pogue” Pogue (this is getting silly – like Paul Newman’s “Paul Newman” Daytona).

When Seiko started advertising the 6139 in the late 1960s, it’s quite possible they expected the blue-dial watch to be more popular and the very first ads featured the blue watches. Only blue and yellow variants were officially available; the silver version has never appeared in a Seiko catalogue so was thought to have been a special order. They were aimed at action men… This –6005 came to me in pretty good shape on its original bracelet, though it’s not running too well, so is currently in the queue for sending to my favoured watchmaker. He only wants 2 watches at a time from me, so I need to batch them up… Long-term readers may recall the association with the blue-dial 6139-600x and another famous and sadly deceased racing driver – Francois Cevert – so rather than saying this is a “Blue Pogue”, let’s call it a Cevert. That’ll keep the pedants at bay.

The blue watch in the advert above, and the 1970 “PROOF” –6000 that I had already, both have a distinctive notch above the crown and a 2-piece chronograph hand denoted by the steel centre; both are indicators of the watch having a 6139A movement, which is marginally thinner than the 6139B that replaced it.

You’ll never see a 6139B watch in a notched case (unless the notch was made by some unscrupulous sort, with a Dremel, as the genuine notched case is too small to take a 6139B movement), though you often see 6139A watches in non-notched cases and with single-piece (all red) chrono hands. These were only ever made with a blue dial, and only for a few months it seems. This one came from January 1971, and has a 6139A movement and RESIST dial.

The lineage of the 600x appears to be:

6139-6007 – could be seen as the American equivalent of the 6001, but for some reason was only ever blue, and probably only from November 1970 to January 1971. All were marked 70m RESIST, the majority had 6139A movements though at least one 6139B exists and almost all have Spanish/English day wheels. It’s always possible that a day wheel has been transplanted during a service, and it’s also possible that a movement swap could have occurred at some point. I’m sticking to the rule that these are all for the Latin American market.

6139-6005 – the equivalent of the 6002 for the American market. Only says AUTOMATIC under the Seiko logo and was RESIST until mid 1972 then no text. Most if not all had 6009T dial codes; I’m dubious about 6009R as there are definitely fakes of that combination around, but have little experience with the 6005 variants as they don’t crop up in Europe very often. It’s reckoned that the -6005 was only made until 1973 at which point, maybe the -6002 took over for American sales.

The Seiko museum has no information to hand about the –6007, but I was hoping to solve the “where did the –6007 go on sale” conundrum with this watch, as it came with box and papers… … but sadly, the purchase details were never filled out. Argh!